Got home late last night from the Boston Marathon. When we left Salt Lake City it was snowing. Apparently Boston wasn’t aware it was early spring and decided to heat itself up into the high 80’s for the oldest active marathon in the world.

The energy of the city is something I can’t describe so if you want to know what it’s like then plan on going there yourself. I have never seen crowds of spectators so large it was phenomenal. Thousands of Bostonian’s lined the entire 26.2 mile course with plastic horns, cow bells and party music. 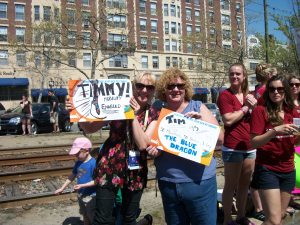 It was suggested to me by my wonderful host family, the McDonald’s, to write my name on my arms with a sharpie so people could cheer me on. This was both a good and bad idea.

I heard my name yelled by so many people it made it impossible to hear when my wife tried to call to me. This was the first marathon I have run where I got to compete with other amputee’s! We even had our own category, ‘Mobility Impaired’. I met so many cool runners among them was SBR or Singapore Blade Runner! I was not aware that my prosthetic leg is called a ‘Blade’. Yea, how cool is that? I run on a blade. In SBR’s country he is considered a national hero. He is the first amputee to compete in the Boston Marathon. Love how his video makes him into a super hero.

This was the biggest marathon I have ever run in. I met regular two legged runners as well. These are among the fastest runners in the world, people from Germany, Japan, Canada, South Americans, and of course Kenyans.

Most of the time I met them just by chance. As we would come up next to each other I would try to engage them in conversation but they wouldn’t be able to understand me. When I was given a silver ‘space blanket’ to keep warm with the wind began to blow it over my head. I looked behind me and said to the two Asian fellas that I felt a bit like Batman on a windy day. They both began to laugh and talking very fast in Japanese, “Something, something, something, BATMAN!, something, something”. Looks like even Japanese people know who Batman is.

I finished slower than I wanted but with the very respectable time of 5:36 and 5th in my category. SBR gave me the inspiration to rename myself to ‘Daybreak Blade Runner’! Even if I can’t go fast at least I can have a cool name.