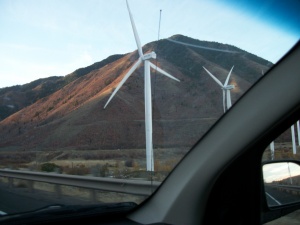 A ‘Wind Farm’ in Utah

It was bound to happen sooner or later. Duke City Marathon (Albuquerque, New Mexico) marked my last werstern state. It’s been just over 2 years now since I  make the  goal of running 50 marathons in 50 states. Since home is South Jordan, Utah I decided to start with all the western states and then move on from there.

I have now completed marathons in all the western states and so from this point I must start going further east.

I left Utah Saturday morning by myself and headed to New Mexico in my trusty Saturn. It was a long 9 hour drive.The driving was during daylight hours so the views and scenery of Southern Utah and the New Mexico deserts were beautiful and truly beyond compare.

I needed to get to the Albuquerque Conference Center before it closed at 6:00pm to pick up my bib number and timing chip since there would be no Sunday race day packet pick up. I arrived at 4:45pm with plenty of time to get my stuff and enjoy the Marathon Expo, so I thought anyway. When I got inside the convention center I found that 98% of the booths were already shut down and cleaned out.

After getting my packet I looked around for a few minutes mostly just to figure out where the starting and finishing lines were going to be and then I left to go find somewhere to spend  the night. Usually I just sleep in the back of my Saturn but things were a bit different in Albuquerque (Hmmmm?? How do I but this nicely….???)

Let’s just say, I thought I’d better get a hotel room for the night just to be safe.

I checked into the hotel and got some dinner at an Italian restaurant across the street. The service was terrible and the over priced food wasn’t much better but hey they can’t all be 5 star restaurants now can they? At least the room was comfortable and I got a good nights sleep before waking up at 5:00 to get ready for the race. 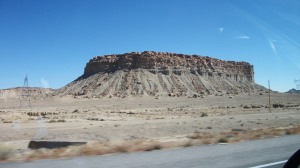 No, this is not a movie set from a John Wayne western, it’s real!

The marathon started at 7:00am so I gave myself plenty of time to get ready. My room was only a couple of blocks from the start line so I drove over and parked close. Since the weather was so nice I sat on a bench on the sidewalk and ate my pre-race breakfast which consisted of:

Since we were downtown the hotels and convention center were all open for the marathoners to use their restrooms. Anytime I can have a real restroom over a porta-potty….I’ll take it.

Even with all the businesses allowing us to use their facilities there were still people standing in line for the nasty portable ones.

What’s up with that? Maybe it makes them feel more connected to Mother Nature or something . Just like the marathon I ran in Austin, Texas last year all pottys  in Albuquerque  were also missing toilet paper.That just tripled the yuk factor. 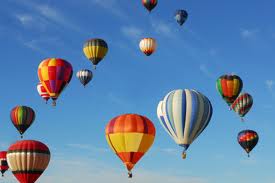 We started in the darkness and ran just a short distance to a greenbelt parkway. Just after the race began hot air balloons were released into the air and that combined with the morning sunrise was really a beautiful site. Almost the entire marathon was on this parkway which for me made it a really good marathon.

The runners didn’t have to worry about getting hit by a car or getting lost since it went one way and was very easy to follow. The path was all blacktop and very nicely landscaped with plants native to New Mexico. We ran for 13 miles and then we lost all the half-marathon runners since their finish line was at the end of the parkway.

As in most races there are always 2 or 3 times the amount of people who run  the half so the second part of the race was a bit lonely. If you were running the half marathon you stopped and got your medal. If, like me, you were doing the full marathon you made a quick u-turn and ran down the same path all the way back.

Most everyone I spoke with were from New Mexico. I talked with very few out of townees. I finished with the very respectable time of 5 hours and 11 minutes but was unable to find any food or goodies left at the finishers area. The half marathoners started at the same time as us and so they ate all the good stuff hours before I got there and didn’t leave anything but some warm bottles of water. 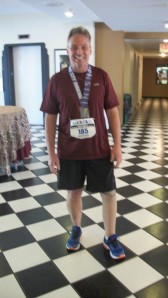 I made my way back to the hotel and showered.

The drive home was long but the desert scenery was very beautiful. I saw an usual amount of  deers leaping across the highway all the way home but figured since it’s late October and the Deer Hunting Season has started it must be the hunters riling them up.

I finally arrived back home in Utah at 1:15 in the wee hours of the morning with my sweet Wife waiting for me. Not a lot of adventure on this trip but I did have fun and who can complain about getting to run 26.2 miles!