The Jackson Tennessee Marathon, state #18, not a particularly eventful marathon I’ve discovered there is  always more to a marathon than the race . Tennessee was beautiful, and the Tennesseans were helpful and friendly. When I signed up I was pretty excited to wander around and maybe tour Graceland or Nashville to see the Grand Ole Opry. Did I mention I love Elvis? 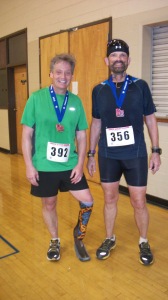 Me and new friend Jim Skibo after Andrew Jackson Marathon

The city of Jackson is sandwiched right in the middle of these two famous cities. I booked a flight to Nashville and had a rental car waiting for me at the airport when I landed. The plan was once I touched down I would drive the 2 hours from Nashville to Jackson but I think I need to go back a little and talk a bit about my flight first.

I left Salt Lake City and landed in Phoenix. After a couple hour lay over in Arizona I left Phoenix for Charlotte, North Carolina. The jet to Charlotte was a good sized plane. There were 3 seats on the left and 2 seats on the right. When I got to my seat I was the first one there and would be sitting in the middle chair of the three. Shortly after making myself comfortable a gentleman showed up and said he would be sitting in the aisle seat.

When he plopped in his chair the shear size of this man spilled over his seat and on to mine practically smothering me with his immense bulk. He didn’t seem to notice that I had almost disappeared behind his shoulders and the side of his stomach. I hadn’t had time to put the arm rests down before he showed up so like a flood filling a dry river bed there was no dam to hold any of him back. So there I was, pinned to the seat of a jet by a man who must have tipped the scales at 400 lbs or more. I thought if I could only squeeze out from behind him I would give him both seats and take the window seat for myself.

This couldn’t be happening.

Before I could panic and start screaming for help a lady showed up and informed my large seat buddy that she would be sitting in the window seat and asked him if he wouldn’t mind moving so she could get in. She didn’t even notice me behind his back being crushed to death. After he stood up and moved out into the aisle she looked at me and laughed.

It must have caught her off guard to realize there was someone else in the seats who was being totally obscured by the body of this man. She had a sweet smile and seemed like a nice person but unfortunately she was a woman of tremendous girth herself probably weighing in at 300 lbs. The gentleman and I moved out into the aisle and out of her way so she could get in and sit down.

Now my turn to take my seat. This nice lady was so large however that she was using all of her chair and nearly half of mine as well. I reached for the arm rest and tried to lower it but just ended up embarrassing myself a little when I noticed it wasn’t going to get past her large frame so I just pushed it back up and took my seat or my half seat since that’s all she had left me.

I just sat there trying my best to think small thoughts and transform myself into a human accordion  realizing the  horrible truth of what was coming next.

The aisle guy along with his entire 400 lbs or more frame was positioning himself for re-entry. When he fell into his chair. I became invisible sandwiched between these two very large passengers.

For 5 hours this was my fate.

Just after taking off aisle man fell fast asleep and began to snore very loudly. His head then fell over on top of my head as he made himself comfortable using me as some sort of human pillow. Both of my arms were pinned to my side and I was unable to read a magazine or even move. If you are reading this you’re probably thinking, ‘Well at least it can’t get any worse.

It got worse, it got much worse. As aisle guy continued to sleep and snore and lay his head on my head he must have been having a nasty dream which got him in the mood for a little spooning because he then moved his giant sized arms around me in a full on hug.

That was it! I had reached my limit and as my hero Popeye the Sailor man used to say, ‘That’s all I can stands, I can’t stands no more!’

I forced his mammoth limbs off me and began to yell for him to wake up. He awoke dazed and confused and immediately began to apologize for anything he may have done while sleeping. When he finally realized what was what he became embarrassed and got up to go use the restroom. I took advantage of him leaving and slid over to his seat and stretched out my squashed arms and torso.

During this time the flight attendant came by with some cups of water to try and deliver some kind of peace offering refreshment. Anyone who saw me sitting there must have felt sorry for the human sandwich that I had become. Both me and the window seat gal took a cup of ice water and as I was putting down my lap try to rest my cup on aisle guy came back and sat down. He noticed our water and ask the flight attendant if he could get a cup also.

So there I sat again in between window lady and aisle guy unable to reach for my water on the tray because once again my arms were pinned to my body.

After just a couple of minutes aisle guy fell fast asleep again and began snoring even louder than before. This would not go on for too long however because after only about 10 minutes into it he had a night terror panic attack. He started screaming and waving his arms frantically nearly taking off my head in the process. With all this screaming and arm waving he managed to spill all three nearly full cups of ice water on my lap. As this was happening the ‘fasten your seat belt’ lights came on and the pilot announced we’d be landing in another 10 minutes.

So here I am walking through one of the largest, nicest, most beautiful airports I have ever been in with the entire crotch of my pants soaking wet. 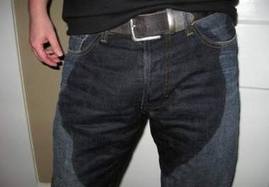 I didn’t pee my pants!

The water stain covered the front of my pants and went between my legs and all the way up the seat of my pants in the back. Everyone I walked past on my way through the airport and to the car rental desk stared at what they thought to be my huge pee accident. I picked up my car without further incident and no one at the car rental desk asked me if I had gone to the bathroom in my pants thank goodness.

After arriving in Jackson and finding the Starting Line of the marathon I realized it was already close to midnight. Since I had to be at the packet pickup desk at 6:00am the next morning I decided getting a hotel would be a waste of time and money so I looked for a parking spot as far away from traffic lights as I could find and pulled the car in there. I then folded down the back seat of this very economy sized Hyundai and crawled in the back and laid down as best I could and tried to get a little shut eye.

The trunk of a Hyundai makes a crummy bed!

Let me just save some time and say I experienced the most miserable nights sleep of my entire life in the back of this tiny car.

Almost immediately it got so uncomfortably hot that I had to climb out of the trunk/backseat and make my way to the front seat so I could start the car and roll down the window. After about 20 minutes I woke up and realized it was way too cold to have the window down so again I crawled to the front to start the car and roll up the window. I had no pillow, no blanket and no room to extend my legs. I had to take a modified fetal position in order to fit my body back there. I was sandwiched in that truck tighter than chicken in a burrito.

I continued to wake up about every half hour all night until my alarm finally rang at 5:45 in the morning. I got up and got ready for the marathon which would start at 7:00. I was tired and cold and hungry. There was no water or snacks at the starting line and in fact this was a very small race with less than 100 runners total.

No big deal I thought after all I’ve seen worse besides I was just excited to run another marathon and have some fun.

Almost the entire 26.2 miles of the race was run on the highway. 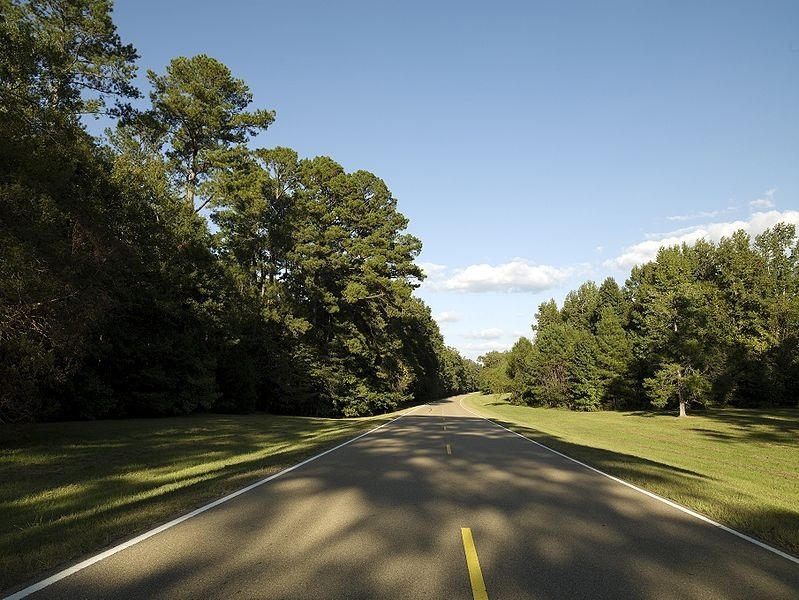 In Utah we have a small part of the street which is separate from the rest of the road and is designated for bicycles. It’s know as the ‘bike lane’. On this small portion of reserved road a runner or bicyclist can feel safe knowing that cars can easily avoid hitting them by just staying out of the ‘bike lane’.

In Jackson, Tennessee they have nothing like this. There is a white line painted at the very edge of the road and then it drops sharply down into a ditch forcing anyone on the road to run where the cars are driving. No one put up orange cones and there were no warning signs or traffic people with flags asking drivers to move over to allow runners to pass or anything that would have made this race just a bit safer. Cars whizzed by the entire race. Many honked and yelled for me to get out of the way. I was so nervous the entire race thinking that at any moment now someone is going to whack me. I was literally sandwiched between the cars and the ditch. I’m happy to report I ran the entire race without getting run over even though I did have to look behind me about every 5 minutes during the entire race. Afterwards the sponsor of the race, Union University, allowed us to use the locker room facilities and shower up.

My flight home made up for the terrible flight there since I had an aisle seat and a young college student had the window seat and our middle seat was empty allowing us plenty of room to stretch out. As I was writing this blog I asked my Wife for a title and since Jackson is sandwiched between Memphis and Nashville and I was sandwiched between two very large people flying in and all night while I slept in the back of the car I was sandwiched in the trunk and during the race I was once again sandwiched between cars and the ditch she came up with a very appropriate title for me!