Upon arriving home from my #19 marathon in Kansas on April 12th I began getting messages from friends on social websites about their excitement being able to attend and be in the Boston Marathon. I was excited for them and slightly envious remembering what an amazing experience running the Boston Marathon was for me last year.  Most of my friends and family assumed I was probably at Boston again this year.

After a long all night drive from Kansas Saturday night and into Sunday, I was so tired it was all I could do to crawl into bed and fall fast asleep. I got up and went to work Monday morning as usual. So far I was having a very typical day until I got a phone call from my Daughter Danielle. She asked me if I had been listening to the news. I could hear the tension in her voice and knew something was very wrong. She said that several bombs had exploded at the finish line of the Boston Marathon. I couldn’t believe what I was hearing. I asked her if she was joking even though I knew she was very serious. My emotions went from disbelief to sadness and even anger. I was unable to understand why someone would do something so terrible to an international celebration like the Boston Marathon.

At first I tried to contact several people I knew who lived in Boston to make sure they were uninjured but I was unable to get through on my cell phone. I was sick over all the images and stories I saw on the television. I saw a photo of 27 year old Jeff Bauman who had lost both his legs when a bomb exploded next to him. I could never compare my experience to a bombing but at the same time it took me back and I felt I was reliving my accident all over again. I felt I needed to share with  all these people who had lost limbs that they would be alright. I wanted to let them know that they could heal and still have a normal life. I didn’t know how I would do this but I knew I had to do something.

I began recieving e-mails on my phone reminding me of the Salt Lake Marathon this coming Saturday and that there were still openings for registation. Since I had just run a marathon in

Abilene, Kansas the Salt Lake Marathon would be only one week later.  It was not on my radar to run another race and besides I was still sore so I didn’t have any intention to run again so soon. After thinking about it and talking it over with my wife Lynette I realized this would be the perfect opportunity to show those people who had been injured in the Bombings and lost limbs that there is hope. That even though things looked bleak they could heal and overcome.

I thought I could run the Salt Lake Marathon and be an example and maybe inspire someone that nothing is impossible and that their dreams and goals for their future could still be obtained. I was at work on Friday the day before the race and my phone rang. It was a radio program that had heard I was going to be in the Salt Lake Marathon as a tribute to the victims in the Boston

Marathon bombings. They interviewed me on the phone and put in on the air.  As Lynette and I went to the Marathon Expo Friday night so I could register for the race we were met by a news reporter and his camera man for the evening news. Later that night we watched as I was on the 10 o’clock news. I thought, ‘This is great!’ I am getting my message out that even a guy with one leg can still run marathons and that life isn’t over because you’re an amputee.

The marathon was scheduled to start at 7:00 am and we arrived around 6:00  to get ready before the starting gun went off. I thought as a nice tribute I would wear my Boston Marathon shirt from 2012. I felt it would help show support and also I wore a sign pinned to my back announcing that I was running in tribute to those victims that had lost limbs. That morning while we were waiting for the race to begin another news reporter and a camera guy asked to  interview me as well. Now let me just say that normally I’m a pretty funny guy with hardly a serious bone in my whole body but in the midst of this enormous crowd of around 8,000 runners with everyone wearing Boston green and a recording of Neil Diamond’s ‘Sweet Caroline’ playing over the loud speakers I got pretty emotional. I tried to keep a smile on my face and look positive but inside I was crying like a baby. 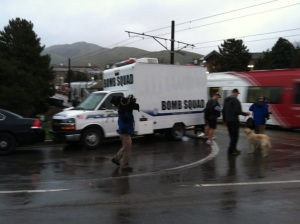 If the terrorists wanted to terrorize people they should of chosen a group other than marathon runners, to quote Steven Corbert ” What the Boston Marathon Terrorists really don’t get is that they attacked an unshakable group of people who run 26 miles until their  nipples are raw on their day off.”  The race went forward with out a hitch. The Salt Lake Marathon is still one of my favorite marathons . The already excellent course had been changed just slightly which  improved it and the warmth and friendliness of the people of Salt Lake was even heightened because of all the tragedy that had taken place just 5 days earlier in Boston. The feeling of pride and patriotism were evident through out the entire run. Even Mother Nature joined in and made sure it rained the entire day. At the end I was soaked to the bone and freezing cold but my heart felt really good because of all the hundreds of spectators and fellow runners I hopefully was able to inspire. 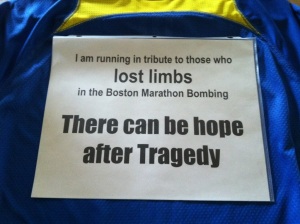 The sign I wore on the back of my shirt