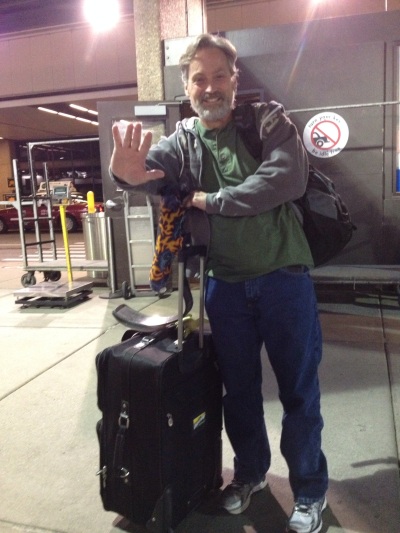 My Mission: To run 5 Marathons in 5 Days

You train hard. You try different workouts, different diets, but when it comes down to the day of the race things always  turn out differently than how you envisioned it. Oh well, cry me a river baby. Each race is a learning process so if it doesn’t turn out the exact way you wanted it to that just gives more motivation to train harder for the next one. It’s kind of the same way my life has been. Believe it or not if I had a time machine I might have gone back and changed a few events. There are no time machines and so I just make the best of every situation. It’s hard to train in one state and then race in another. Many things are different from state to state. Weather, altitude, humidity, the list goes on but one thing stays the same all the races are at least 26.2 miles! Oh yeah baby! Bring it on!

Half of the challenge of doing these marathons is just getting there. I always have interesting experiences when I fly. This particular trip I had a layover in Houston. The weather in Texas is every bit as unpredictable as the weather in Utah. Sitting there next to the window looking out at a clear blue sky it just started to pour the rain! After about 30 minutes, like magic the rain stopped, the clouds parted and the blue skies came out again. When I got to my gate the airplane mechanic announced that, “This plane isn’t flying anybody anywhere”. They moved us to another gate only to make us wait 3 1/2 more hours. Once our new plane finally arrived and we were on board we were dead last behind about 10 other planes waiting to take off so there was another 1/2 hour. By the time I got to Atlanta and picked up my car I had been delayed over 7 hours. With 6 plus hours of hard driving in the darkness and heavy rain I made it to the hotel in Bluefield West Virginia.

The trip home was equally as interesting but the layover was in Dallas this time and the city was in panic mode with the prospect of an Ebola Virus outbreak there. While sitting in the airport I saw large groups of what appeared to be American college students in surgical style masks and rubber gloves. Weird and slightly terrifying.

I finally made it into the room at 3:00am before my head hit the pillow. When my alarm went off at 6:00am I was dazed and confused. For some reason I thought it was Saturday  I was at home in bed and that I had forgotten to not set the alarm for work. That’s when my roomy Mike flipped on the lights and said,”Let’s go run a marathon!”. Uggggg, that’s right, I’m here on a mission. A mission to run. And run we did. 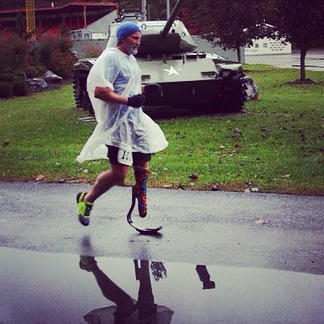 Mother Nature was not cooperating and in fact she didn’t even act like she was the least bit happy to see us. It rained all day as I ran up the very hilly coarse and she even threw in a few hours of windy gusts as well. That night after looking at the effects of the moisture on my skin I noticed some very nice and fairly large abrasions. I knew this wasn’t good and usually these only get worse which is exactly what they did. I’m no beginner. I know to slather my body down in Vaseline and Body Glide and anything else I can get my hands on but let’s face it when you’re running in the hard rain for 5 plus hours you are going to chaff.

Day one was very fun and I got to connect with many friends I haven’t seen in awhile. The biggest enemy I was fighting was not the weather or even the miles but the lack of food and sleep. I kept getting dizzy and my head was spinning most of the day. I drove over from the motel to the start of the race with Mike because I was so sleepy I was afraid I might crash my car.

Now I know it’s true, I really can run a marathon in my sleep. After the race I hitched a ride back to the motel, took a 3 minute shower, downed a footlong at the Subway and slept 13 hours till the next days race. 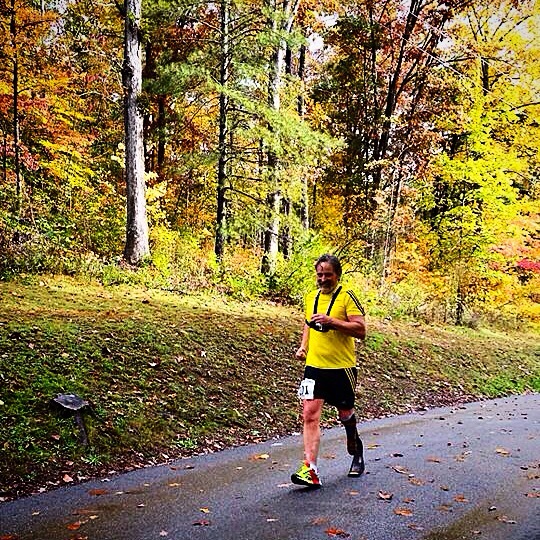 Fall foliage at its finest

Day #2 Bluefield Virginia  This was the same course as day one. Since the Bluefield course was in both Virginia and West Virginia we raced two marathons. Boring… ya but I’m on a budget here with this thing so I’ll take two states for the price of one trip. Even the weather was a repeat of the day before. Rain.. Run…Chaff… Repeat.

My race times for these race series are always slower than for a single race. I finally figured out why thanks to my new go pro. This was the first time I used it. I accidently strapped it on my chest upside down so I had to then figure out how to flip the image before I could view it. When I did view the video the results were very interesting. Since the course loops are only a couple of miles you get to see all your fellow race buddies and friends coming and going. Also you pass the water table/porta-johns/snack table every two miles so there is a lot of talking and visiting. There is a lot of snacking and drinking and a lot of porta-john participation. Multiply this by 12 loops and you’ve added an hour or so onto your time! Not good. When I run a single race my first and only stop isn’t until around mile 19 or so. Sure these races are much more fun and all but I’ve got to learn to not be so talkie.

The fall foliage was intensified by the constant rain. The views were breath taking. I had always heard about the Smokey Mountains but I never realized what that meant until I saw them for myself. They really do look Smokey! 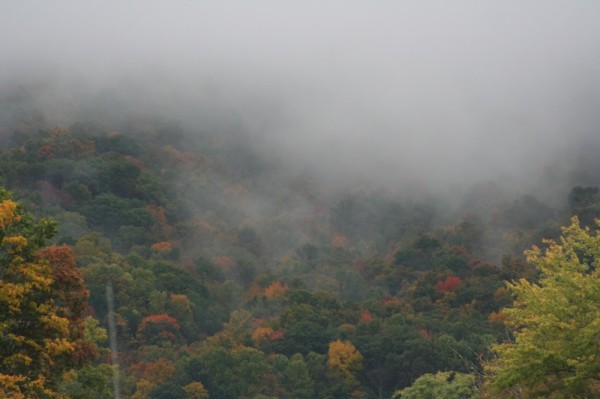 Them  there is da Smokey Mountians 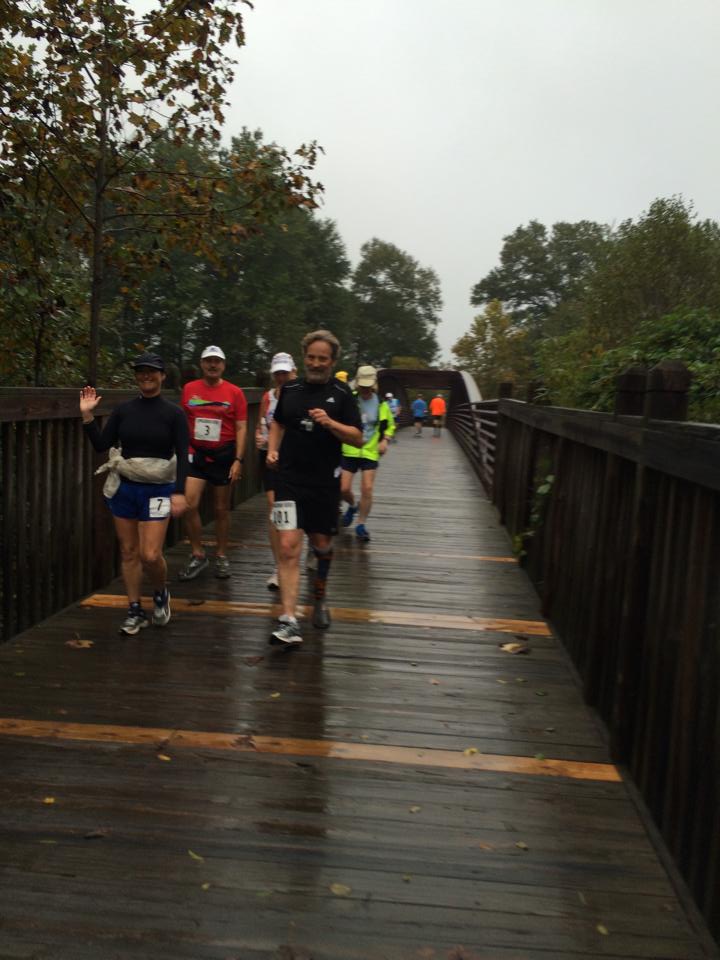 The temperature was pleasant and even though it rained again it was some how refreshing. The course was amazing, By the time you have run three marathons in three days you get to know a lot of people really well.

These crazy folks are from all over the country. There is almost every state represented and even a few chums from Europe and other parts of the world as well. We have a great mix of amazing athletes. Everyone of them has a story and a reason for wanting to push themselves to the limits of human endurance. For years we have been told that no one can run more than one or two marathons a year and here we are proving with our bodies and our minds that these old stereo types and misconceptions are all wrong and outdated. Human beings are tougher than anyone ever thought possible. Many of the runners let their individual personalities shine through in the outfits they chose to wear while a few barely wore anything beyond a pair of shorts and shoes. As different and truly inspiring as everyone was the one thing we all had in common was our love of running.

Race #4 Yes….you guessed it,  it rained again. This was the most rain of all. Remember in the movie ‘Bowfinger’ when they talked about Chubby rain? This was Chubby rain. The course was flooded and it became almost comical. Some runners because of chaffing  ran almost naked. No clothes=no chaffing. One couple put on goggles and flippers. I think they were hoping to count the race as a Triathlon. The heavy rain and wind was extremely fatiguing and all I longed for was dry clothes and hot food. We had been warned that if the lighting didn’t stop there was a possibility of the race being cancelled at the half way point. Thank goodness the lightening stop. Sad the rain continued. 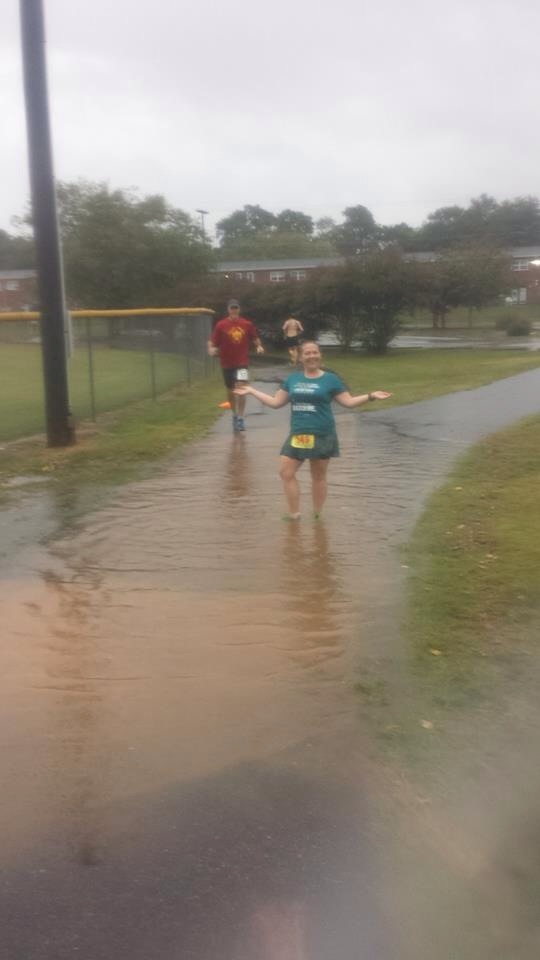 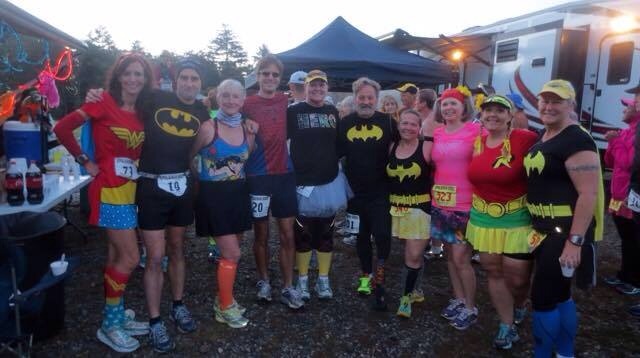 Day #5 Be your own Superhero

Day 5 was to be a fun day and runners were incouraged to dress like their favorite super hero. I of course choose BATMAN the greatest super hero. A lot of others must have shared my opinion because as it turned out there were 4 other Batmen/Batwomen.

The race was supposed to be cancelled because orginal the course was practically now under water, but somehow the race directors from Mainly Marathons secured an alternate course. The loop was literally through a meadow up into the woods and back. If you’ve read my feelings about trail runs you know that I struggle with them, I don’t lift my legs high when I run, I kind of shuffle. By the end of my first loop I had fallen 3 times and one of those times I had to literally be rescued after a fall into the mushy ground by a group of women runners. My Batman ficade was tarnished forever. 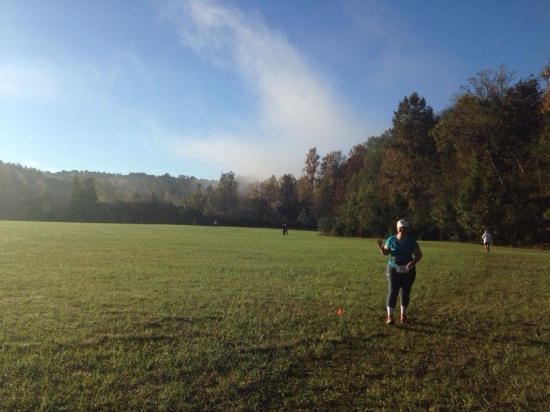 The alternate course up through the woods

After the loop of humiliation. I knew this trail run situation was probably not going to work for me. I made the decision that 4 marathons would have to suffice for this trip and headed back to the airport to catch  an early flight back to Utah. Like I said in the beginning of this blog challenges bring unexpected adventures. I will be returning to Georgia for a new adventure. 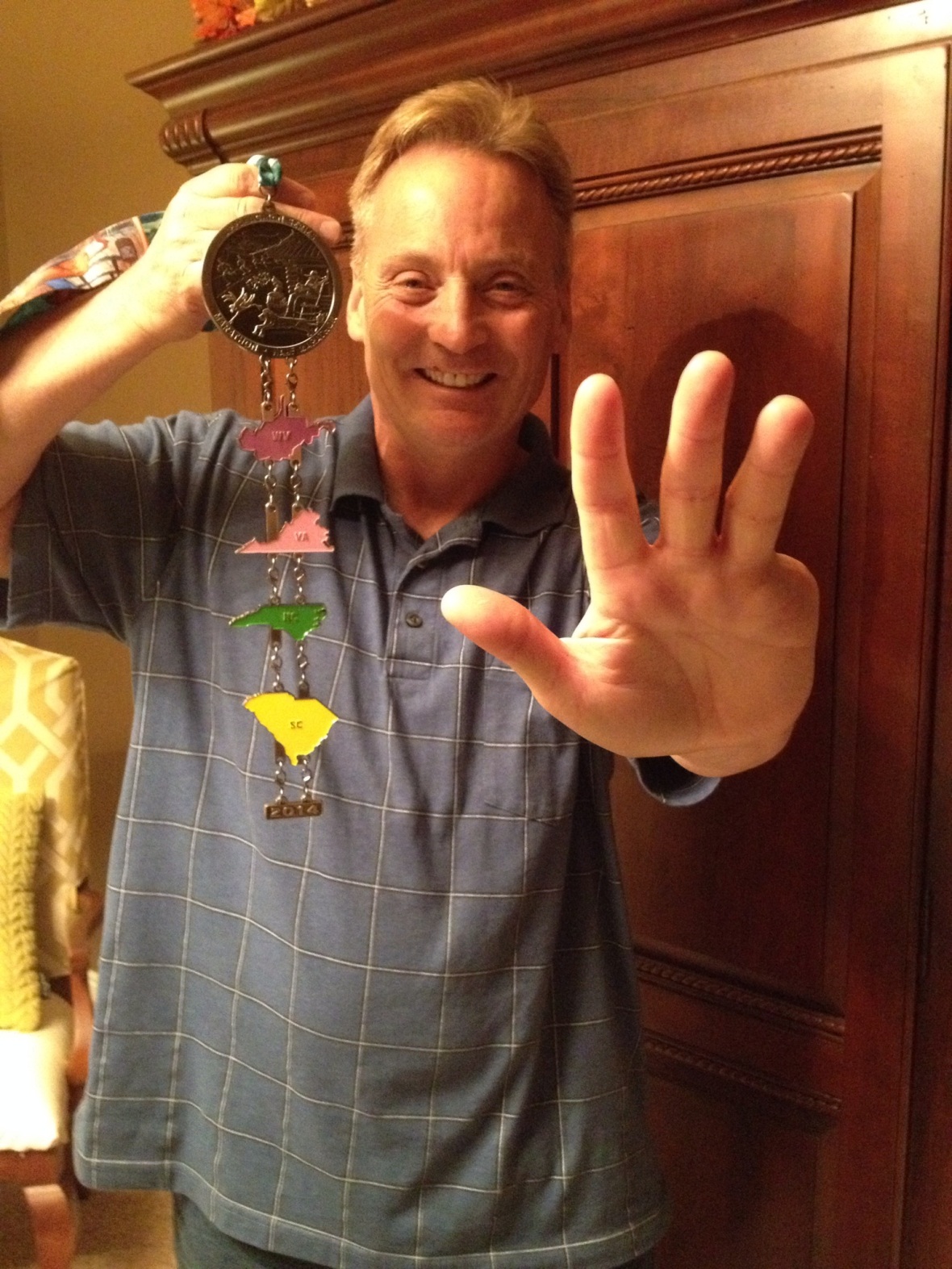 Oh the ,Irony…Correction My mission is apparently 4 marathons in 4 days 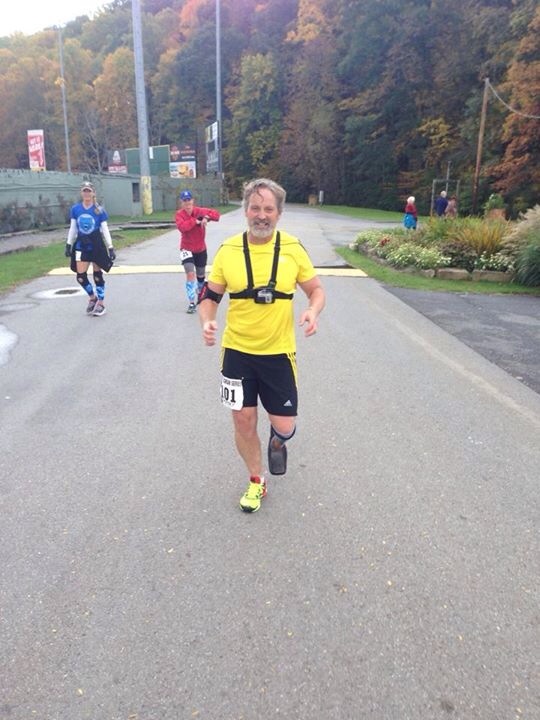 Moving on to my next adventure