Hey… I’m running here! (insert a Jersey accent) Thanks to the Challenged Athlete Foundation and donations to my recent online fundraiser, I was able to complete state number 38, despite my recent un-employed status.

The Novo Nordisk Marathon began at Monmouth Park in Oceanport and meandered through eight beautiful New Jersey shore towns, including Monmouth Beach, Deal, Allenhurst, Lock Aurbor, Asbury Park and Ocean Grove before reaching the finish line on the Long Branch Promenade. Imagine running along the board walk beside the ocean on a perfect spring day and you’d have described this marathon. I gotta be honest after reporting on 43 marathons writing about the actual run is getting redundant. What I’d like to do is to write about the vibe of each state I run in. Every state has its own little culture. Here are the top 5 things I learned in New Jersey Land. 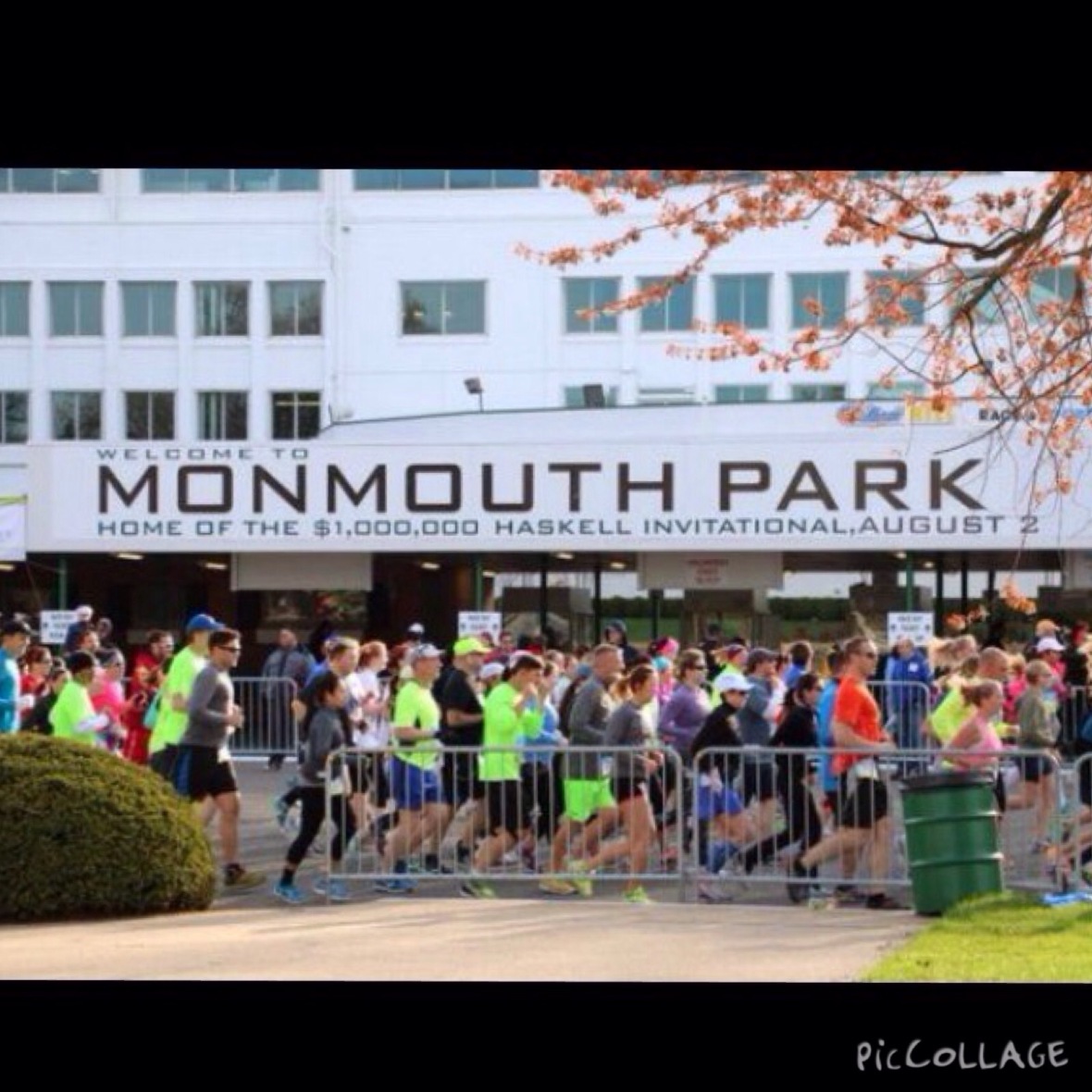 1) Horse Racing is real. I know… Duh? I had never actually seen a horse racing track in real life. Upon arriving at Monmouth Park where the Expo was located I had no clue it was a horse racing track. You would have thought after seeing a dirt track and spectator seating, I would have put 2 and 2 together. I thought how peculiar New Jerseyians affinity for track and field was. I assumed they built this giant track and all these facilities just for this marathon. It wasn’t until I came home, viewed the video on my “GoPro” and my wife pointed out how cool it was that they used the “called to post” bugle call that they use for the horse races to start the marathon. OH….that was a horse racing track, I get it now.

2) Always carry cash on the new Jersey turnpike. After arriving at the Newark International Airport I started on the trek to Monmouth park to pick up my Expo packet. I expected heavy traffic but am unfamiliar with toll roads. Oh and don’t think the people at the car rental office are going to give you a heads up. As I came to my first toll booth, I handed my credit card to a rather intolerant black woman. She exclaimed, “Cash or Pass only”. I jokingly said, “I’d like to pass please”.  Apparently that was the way wrong answer! I thought she was going to reach over and crush my throat. Apparently people don’t care for jokes when they’re working. She looked at me the same way you’d look at a stupid mule and said, “Honey, you don’ t have cash? How do you pay for things?” I tried to explain that in Utah I rarely carried cash and that we all use our debit card for everything. Within seconds the horns of the cars behind me began to honk. She handed me an envelope and told me to mail in the $1.50 but not before making sure that I knew I was a non cash carrying moron.

3) Doping with Beets.Things went pretty smooth after picking up my race packet. I wandered through the sports Expo until I came to a beet booth. Ya, you read it right, a beet booth. I was uncontrollably drawn to the pre-packaged bags that looked like blood and a human heart. To be perfectly honest I didn’t know it was a beet booth at first, I thought it was a human organ transplant table. A young very muscular woman with a thick Slovak accent engaged me and sensing my confusion she said, “They are beets, how many would you like? ” Ewwww…… I hate beets. They are at the top of my ‘food I do not like’ list. “You need this for your marathon!” she continued.  Turns out consuming beets has been shown to increase time to exhaustion during strenuous exercise and decrease the oxygen cost of low intensity exercise. It gives a performance boost in long events such as the marathon. Too bad Lance Armstrong didn’t know about this. Looks like I’ll have to man-up and eat beets!

4) Posh cheering at a marathon. Spectators are a very intricle part of keeping a runner motivated. I found some of the spectators in new jersey took it to a new level. New Jersey is home to some amazing estates that happened to border the race route. Homes so huge and with lawns that go on forever and driveways so big that the residences rolled to the race in their golf carts. Just think of it like Billy Madison meets Thurston Howell the Third. The usual hand written motivational signs were replaced with professionally printed ones and runners passing by were offered coffee from sterling coffee dispenser and pastries. “Lovey, go ask Gilligan to get more pastries for the sweaty athletes obscuring our view of the ocean.”

The ride home was fairly uneventful except for the lady with the cute Shih-tze occupying seat next to her. Comfort animals are becoming more common on airplanes but this is the first time I saw on animal not in a carrier flying. The

next race I need a comfort pony

flight attendant told us she has seen many kinds of animals, small horses, snakes and even a goose. Yes, a passenger ironically brought a goose. It caused quite a stir honking and most memorably ruining the seat AND the suit of the man sitting next to them with goose dung. Glad I missed that flight. Oh if only I knew about the comfort animal loop hole. My two ferrets, Cloud and Bandit would have been great traveling companions.

My adventure in NJ was great. Thankfully there were no signs of the mob or Snooky which was just fine by me. Finished the race in 5:37. The race was well organized. My only critique Is that there was not a lot of swag or food at the beginning or the end. Great medal though. I’ll be adding another cool medal to my 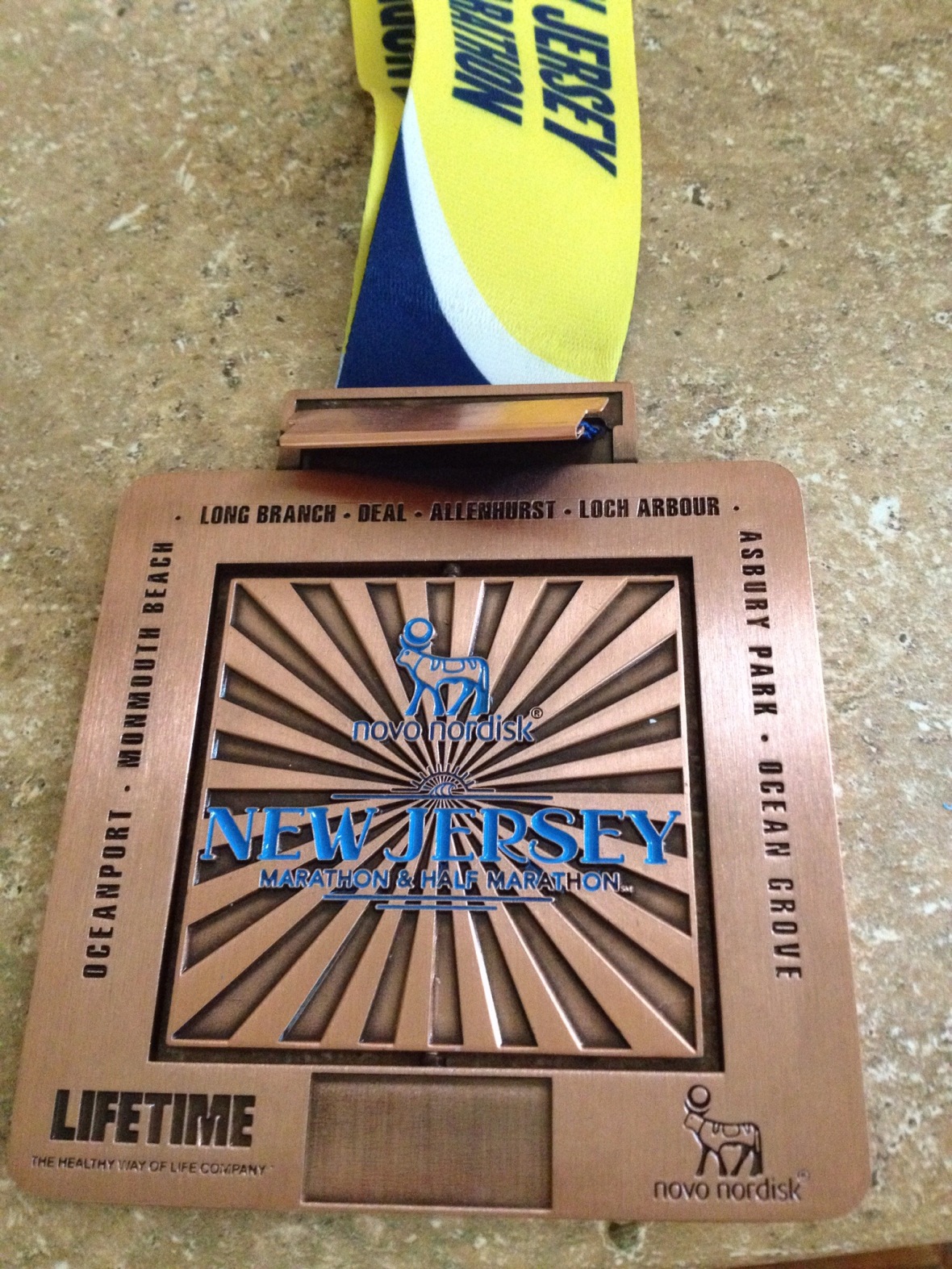