Training for the Boston Marathon has begun. I am planning for my best race so far. 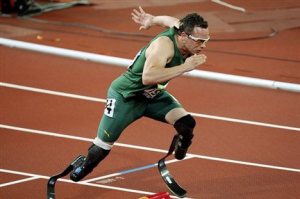 This year’s Christmas present from my Wife was an iphone with specific instructions from her to add the Nike running app on it. This app may have changed the way I run forever. Almost immediately I got faster and I have come to realize that the advice I’ve received in the past from some very prominent experts and fellow runners is true. I need to stop thinking like a guy with a handicap and think like a person without limitations instead. Everyone of us has some kind of handicap and yet all of us have unlimited potential and the ability to overcome them.

Last year after running the Rock n’ Roll Marathon in Phoenix I met a guy who introduced himself to me as Barefoot Todd .He had just completed his 100th barefoot marathon. He congratulated me on the race and then implied I could run faster and even try running barefoot. I never even considered running barefoot (I think not,one handicap is enough) and I was almost offended when he suggested that I should run faster. After all I’m handicapped. I’m just lucky to be out here in the first place. Barefoot Todd didn’t see it that way. To him I was on equal footing (no pun intended) with everyone else. He even told me that I should train the same as a two footed runner.

After running my first marathon a problem began to develop in my stump. It would swell up something terrible after passing the 1/2 way mark. My solution was to take Tylenol almost non-stop until the end of the race. It didn’t work very well. I decided to talk to the premier prosthetic Olympic runner Oscar Pistorius and get his insight on this problem. I called and left a voice message and waited almost 2 months for him to call me back. His frankness shocked me. He told me to stop being a baby and just deal with it. At the time this didn’t seem to be the answer I was looking for but later it would be.

I had convinced myself that I would never be any faster than a 5 1/2 hour marathon however after just a few days training with my new app pushing me along I have already cut 1/2 hour off my time on my 9 mile morning run. I have had to change my stride to be more like a two legged runners stride. While in the middle of training I had an epiphany, I had to stop thinking of myself as limited and start thinking of myself as limitless. Bring on Boston!

“Our deepest fear is not that we are inadequate. Our deepest fear is that we are powerful beyond measure. It is our light, not our darkness that most frightens us. We ask ourselves, Who am I to be brilliant, gorgeous, talented, fabulous? Actually, who are you not to be? You are a child of God. Your playing small does not serve the world. There is nothing enlightened about shrinking so that other people won’t feel insecure around you. We are all meant to shine, as children do. We were born to make manifest the glory of God that is within us. It’s not just in some of us; it’s in everyone. And as we let our own light shine, we unconsciously give other people permission to do the same. As we are liberated from our own fear, our presence automatically liberates others.” Marianne Williamson

8 thoughts on “Boston Bound, a new year, a new attitude!”