Two men making their way to 2 States to run 2 more marathons, this is where the adventures begin. The two men being myself and my brother-in-Law Mike McCoy. A big thanks to Mike for being my wing man to the North and South Dakota Marathons.

Mike was a top notch navigator and even surprised me with a detour to Devil’s Tower in Wyoming where Close Encounters of the Third Kind was filmed. It was pretty amazing.

It was a 13 hour drive from Salt Lake to Bowman, North Dakota. We arrived at the packet pickup site, the Bowman Golf Course around 6:00pm. Bowman City was offering a pre-race dinner, so since there weren’t a lot of options and we were starving I thought we’d stay and eat with the other runners. North Dakotans have an unusual take on carb loading. The food was good and there was certainly plenty of it but it was strangely starchy. Carb loading sounds appropriate before a marathon but in Bowman it was more like going to a church pot luck than dinner. You can judge for yourself…Menu items: spaghetti, mashed potatoes, dinner rolls, rice, and ham. When someone ask why ham was with all these starchy items one of guys said ‘because ham’s good’. Makes sense to me.

After dinner we checked in to the only hotel still available and tried to book a room. Our only option was  a single smoking room  with a roll out bed. I told the desk clerk I didn’t smoke and  asked if that meant I was required to take up smoking. She laughed and said no I didn’t have to start smoking. I was greatly relieved. Mike was nice to me since I was going to be running early the next morning and let me have the bed while he took the roll out.

After running many marathons I have found I no longer get nervous at these races but this was not the case in North Dakota. I was nervous this time, very nervous. I had not run a marathon in several months and even though I trained for this run I started to doubt myself. I had a restless sleep and woke up before my alarm the next morning. I was anxious to get down to the starting line and see the course. The race was to begin at 6:30 and we arrived and hour early. It was cold and there was a pretty good wind. There were deer and antelope all over the semi paved road we would be running on. After meeting up with several old friends that I had met on past races and getting my last minute preparations it was finally time to begin. As soon as the starting gun went off the nerves left and the race was on. 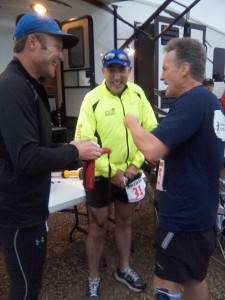 Brothers from other Mothers, marathon friends Trent and Denis

Most of my marathons are rather lonely because I’m not in the speedy crowd. I see all the runners at the beginning and if I’m lucky a few at the end but almost no one in the middle. This would not be the case in Bowman. It was an odd marathon course, 1 mile up, turn around and 1 mile back for 26.2 miles. I had the opportunity to see everyone else over and over. This might seem a little boring but it was kind of refreshing since I got to talk to runners I would never have been able to talk to in a normal course.

One of the guys I got to meet was  from the ‘Running to Honor Heroes Project’. He was running for his fellow soldiers that had died while in military service. He ran up beside me and asked if I had lost my leg while serving in the military. I told him no and he said he was still very proud of me to be able to over come my injuries and be an example to others who had lost limbs. He offered me a medal displaying his cause. I was very touched and honored and will treasure this medal as one of my favorites thus far.

Medal given to me from running to honor heroes project

It was raining for most of the race but it was light and didn’t seem to affect me much. The wind however was another story since it just kept increasing with every lap until we were fighting 30 mile an hour head winds. I finished with a decent time of 5 and a half hours. After the race Mike and I headed over to Subway to stuff my super hungry face. Before losing anymore daylight we bee lined it out of North Dakota and headed straight for Mount Rushmore in South Dakota. This was definitely a bucket list event. What a monumental achievement this carving was. It never fails to amaze me how incredible humans are when they put their minds to do something. 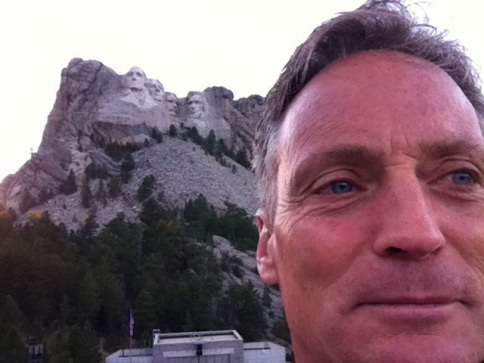 Anything a man can conceived and believe, he can achieve.